DUBLIN - May 28, 2019 - Medtronic plc (NYSE:MDT), the global leader in medical technology, today announced real-world clinical outcomes for the MiniMed(TM) 670G system, which is being used by more than 180,000 people today. Data on nearly 8 million patient days1 showed an average Time in Range of 71 percent across all age groups. The advanced algorithm in the MiniMed 670G system automates and personalizes the delivery of basal insulin 24 hours a day and is the only commercially available technology in the world that proactively drives increased Time in Range by consistently guiding to the target of 120 mg/dL throughout the day-the lowest range offered in an automated insulin pump system. See animation to understand how the MiniMed 670G system works.

"The consistent data across a large sample in the real-world illustrates the positive outcomes with the MiniMed 670G in an uncontrolled environment," said Satish Garg, M.D., Professor of Medicine and Pediatrics and Director of the Adult Diabetes Division of Barbara Davis Center of the University of Colorado. "Since the launch of the system in 2017, there has been a growing body of data that shows that the system consistently improves Time in Range in majority of the patients who successfully are able to stay in the Auto Mode surpassing that of other commercially available methods of Type 1 diabetes management. These observations in a real-world setting of what was initially observed in the controlled pivotal trial of the system are impressive. The MiniMed 670G represents the highest standard of care for diabetes today."

"Clinical consensus about Time in Range is that the goal of effective diabetes management is to have a person be in the recommended range of 70-180 mg/dL for at least 70 percent of time. This may increase the likelihood that short and long-term complications of this chronic disease can be avoided," said Dr. Robert Vigersky, chief medical officer for the Diabetes Group at Medtronic. "The high number of adult patients reaching and surpassing this Time in Range goal illustrates the strong positive outcomes that the MiniMed 670G system can drive. Improved Time in Range is also seen in children as young as 7 who face unique challenges with maintaining control due to a variety of factors including increased insulin sensitivity and cognitive, behavioral, and social-emotional development during this phase of life."

On average, people using the advanced features of the MiniMed 670G system experienced 2.3 additional hours of Time in Range per day compared to people not using these features, representing more than 35 additional days a year that a person with diabetes is spending in the target glucose range.

"My life has changed significantly since starting with the MiniMed 670G system with improvements to both my quality of life and health," said Kurt Schwedler. "The most striking change for me has been the dramatic drop in the mental and emotional burden of living with type 1 diabetes. Since using Auto Mode with the MiniMed 670G system, I no longer think about my diabetes all the time. After many years continuously thinking about what I'm doing, what I'm eating, and why I'm high or low; my constant diabetes thoughts are now minimized. Medically, my Time in Range is consistently over 80 percent* with fewer lows that I used to struggle with and shorter periods of occasional highs."

Analysis of the data also reveals that the most advanced features of the MiniMed 670G system reduced low glucose episodes (sensor glucose (SG)<70mg/dL) lasting more than 20 minutes by 28 percent and high glucose episodes (SG>250mg/dL) lasting over 3 hours by 55 percent annually. Avoidance of the roller-coaster of high and low episodes is a critical aspect of diabetes management since patients feel frustrated when this happens and are often unable to correctly respond, which further perpetuates the negative cycle of lows and highs. Hypoglycemia (low blood sugar) is a condition that can cause confusion, disorientation, loss of consciousness, and in the worst cases can result in coma or death. Hyperglycemia (high blood sugar) contributes to the long-term complications such as cardiovascular disease, nerve damage, kidney failure, eye damage that can lead to blindness and foot damage potentially leading to amputation.

Time in Range
Time in Range refers to the percentage of time people with diabetes spend in the optimal glycemic range of 70-180 mg/dL. The goal with diabetes management is to increase time spent in this target range and to minimize high and low sugar levels, which can lead to both immediate and long-term complications such as damage to blood vessels - increasing the risk of coronary artery disease and stroke. Damage to blood vessels can also lead to loss of vision, kidney disease, and nerve damage. 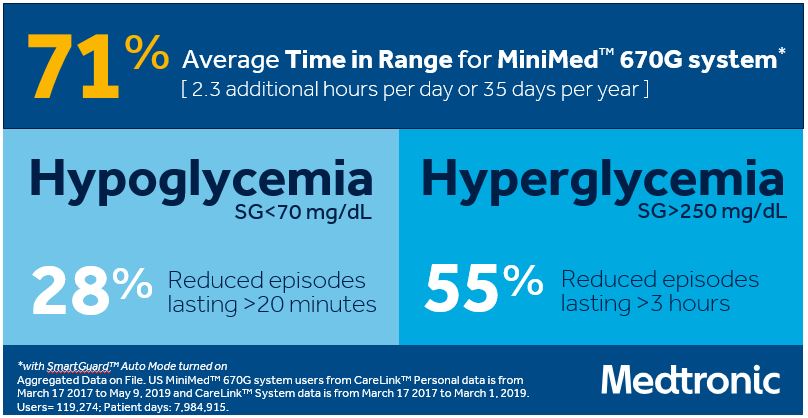 (click on thumnail for larger image)
Real-world clinical outcomes for nearly 120,000 users of the MiniMed 670G system showed an average Time in Range of 71 percent across all age groups along with reductions in low and high glucose episodes.

About the Diabetes Group at Medtronic (www.medtronicdiabetes.com)
Medtronic is working together with the global community to change the way people manage diabetes. The company aims to transform diabetes care by expanding access, integrating care and improving outcomes, so people living with diabetes can enjoy greater freedom and better health.

About Medtronic
Medtronic plc (www.medtronic.com), headquartered in Dublin, Ireland, is among the world's largest medical technology, services and solutions companies - alleviating pain, restoring health and extending life for millions of people around the world. Medtronic employs more than 90,000 people worldwide, serving physicians, hospitals and patients in more than 150 countries. The company is focused on collaborating with stakeholders around the world to take healthcare Further, Together.

Any forward-looking statements are subject to risks and uncertainties such as those described in Medtronic's periodic reports on file with the Securities and Exchange Commission. Actual results may differ materially from anticipated results.

Learn how Medtronic is innovating for healthcare.
X
X